Stephan Grabowski grew up in Denmark and kenya. He started playing the drums at the age of 10 in kenya, while listening to the tribal drums from the villages in the mountains every night.

He is an experienced composer and musician. A songwriter, theatre composer, drummer, singer, producer, arranger.- and a skilled lyricist as well. 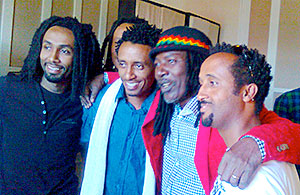 He has made a string of highly acclaimed albums in his own name, worked at large theatre productions as “The Bollywood Trip”, “The Falling Man”, “Ring af ild”, and has written the croon album “Konger for en aften” for DRUO ,-the national radio & television orchestra, (that sadly is no more).

Since 2007 he has worked internationally with top musicians and partners in: Mumbai,- India, / London,- UK, / Addis Abeba,- Ethiopia, / Islambad,- Pakistan.

–  This was something that started around his 5´th solo CD: “Bombay Feber” in 2007, but really took speed with the album and theatre show “The Bollywood Trip“,- and since with the danish/Pakistani band Rocqawali, as well as african blues recordings in Ethiopia for the political EP and theatre show “The Falling Man”. “The Bollywood Trip” was recorded with a string of A.R Rahman´s amazing musicians in Mumbai, as well as people in denmark such as Waqas Ali Quadri from the band “Outlandish”. (A.R Rahman has received 2 Hollywood Oscars for his music for “Slumdog Millionaire”, and he is the biggest Bollywood composer). 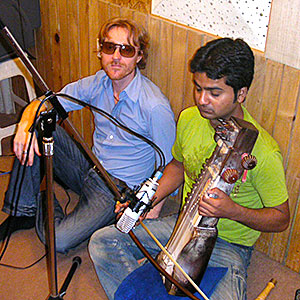 As a producer Stephan recently produced the sophisticated jazz/pop debut for Nanne Emilie with: “Once upon a town”, – an album that she is currently enjoying a lot of succes with in Germany. In the same period he also co-produced the strong come-back album of danish pop legend Nanna with : “Nødigt, men dog gerne”.

He was part of the first wave of  danish indie pop with the massive popular band Lars H.U.G & The Zombies, as a band member in their “classic period” from 1987-1993. Both on stage and in the creative phases, as well as the studio recordings of the very succesfull, now classic albums: “Kopy” and “Blidt over dig”. Albums that received nummerous danish Grammy´s in 1989 and 1992.

He was also a member of the band Love Shop from 1988-1992 and play the drums on all of their classic songs from the first 3 albums. At the same time of all these activities, Stephan has produced and arranged for a still growing amount of danish artist´s in all genres. Names such as:  Nanna Lüders, Nanne Emilie, DRUO- RadioUnderholdningsOrkesteret, Angu, Van Toornburg, Liva Anderson, Strawberry Blonde, Channe Nussbaum, Jacob Eriksen, Kristine Blond, Ali Kazim, Naja, Paul Thrane, Lise Blaase.

In 2003 yet another Stephan Grabowski album saw the ligt of day, “Konger for en aften”. An album in the croon genre that he wrote for danish legends Peter Belli and Ivan Pedersen in front of the the Danish Radio Orchestra. A record that the danish national paper Information categorized as: “One of the most substansial pop records in the last decade”. 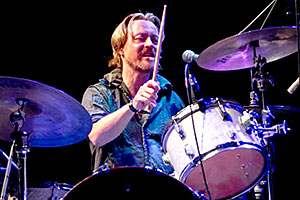 In 1999 he released his third solo album “Danmark Drømmer”. A unique blend of Drum’n’bass and a string group from the national radio symfonics, (DR. Radiosymfonikerne). An album, not so much of straight songs, but with a more dreamy and complex musically “stream of conciousness” feel. Several of the lyrics were inducted in the Danish Encyclopedia.

In 1996- 1997 Stephan explored the club scene and the ongoing electronica of that period. This resulted in one of the first electronic albums with danish lyrics: “Underligere end kærlighed”. An album that were released to immense praise of the press in 1997. In 1994 he played a pivotal role in starting the acclaimed band “Goldfinger”. A band with a primary love for 60és filmic pop music. He produced and arranged the  album “Songs for nightclubs”. 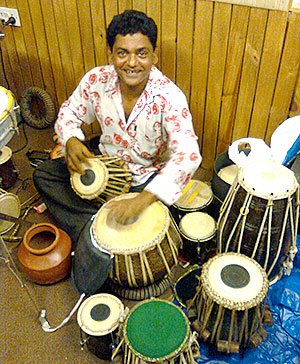 In 1993 he had his solo debut with the album “Glitter Angels”, the only solo album he has done so far in english. He was made the cover star of Gaffa, (the biggest music magazine in denmark), in June that year, and toured the whole country, (plus he played the famous Roskilde festival with huge succes). His debut was nominated as “Rock album of the year” at the Danish Grammy 1993.

Stephan has also made several courses for danish artist´s through The danish Artist Union, (Dansk artistforbund), as well as teaching at the Rythmic conservatorium in Copenhagen, as a guest teacher in 2004-2006-2007-2008-2009. Further more he has teached at Borups Højskole 2009-2013. He regards India as his ”second country” and has travelled there for more than 20 years, deeply in love with it´s music, culture and people.